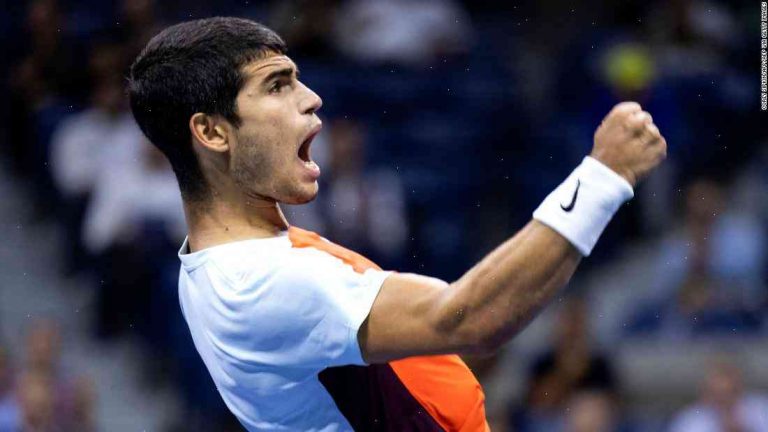 LONDON, England, Jan. 17 (UPI) — Carlos Alcaraz, who reached his first grand slam semifinals on Wednesday, reached the finals of the All England Club tournament at 7:35 a.m. British time after a marathon, late-night finale in which he ended the tournament in fine fashion on a rain-plagued day in a 6-3, 6-6 (4), 6-4 win over Jannik Sinner.

The victory gave Alcaraz a chance to advance to Sunday’s final against Novak Djokovic, the world No. 1 who defeated Sinner 6-3, 6-3, 6-1 to win Britain’s first Grand Slam title at Wimbledon. Alcaraz, who began this marathon with a quarterfinal defeat to Jo-Wilfred Tsonga on Thursday, ended it with a victory over the Spaniard.

He took a set off the 10th seed before being broken by Sinner and then suffering an early blow when he walked for a third set. But Alcaraz battled back, and he broke Sinner again in the fifth game of the deciding set to pull ahead, 6-4. When Sinner pulled off a gutsy rally for 2-1 in the seventh game, Alcaraz was serving for the first set.

Alcaraz was the first player in the first hour to break through to 20 aces to open the second set, and he continued to serve well in the second, as he closed it out with a series of big, clinical returns.

A fourth-set marathon, which saw him finish at 6:22 a.m. local time, saw him save a break point when he caught a forehand down the line, but Sinner broke back to take a 2-0 lead, and three successive points from the Spaniard saw him take the set.

It was only 5-4 when Alcaraz served for the deciding set.

“I played a lot better than I did yesterday,” Alcaraz said